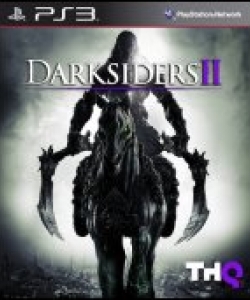 Darksiders II follows the exploits of DEATH, one of the four horsemen of the Apocalypse, in a weaving tale that runs parallel to the events in the original Darksiders game. This epic journey propels DEATH through various light and dark realms as he tries to redeem his brother WAR, the horseman who was blamed for prematurely starting the Apocalypse in Darksiders.

Featuring a dramatically larger world, full weapon and armor upgrade systems as well as bigger and more challenging dungeons and vast array of new enemies and bosses, Darksiders II strives to improve on every aspect of the original hit.

Awakened by the End of Days, Death, the most feared of the legendary Four Horsemen, embarks upon a quest to restore mankind, and redeem his brother’s name. Along the way, the Horseman discovers that there are far worse things than an earthly Apocalypse, and that an ancient grudge may threaten all of Creation . . . Can DEATH really become mankind’s savior? The original Darksiders, released in January 2010, received critical acclaim including the Best Fantasy Game 2010 award from IGN. Darksiders followed the story of WAR, wrongly accused of starting the apocalypse, on a quest to reclaim lost honor and take revenge on those who wronged him.