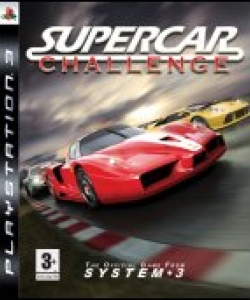 Building on the critically acclaimed Ferrari Challenge racing simulation engine, SuperCar Challenge heralds the addition of the sexiest supercars on the planet while improving on its spiritual prequel in every way.

Over 40 cars will be available to throw around the most celebrated corners on the racing calendar. Experience the thrills and spills that come with harnessing the full grunt of an Aston Martin DB9, the Lamborghini Murcielago RGT, the McLaren F1 and many more! Of course, the game caters for the Ferrari fans too with a selection of favourites making the cut from 2008’s Ferrari Challenge.

Players young and old, veteran or novice will be able to enjoy the look and feel of a real supercar thanks to brand new additions to the handling modes, with the ultimate aim being to graduate players through to full simulation handling.

Your opponents’ artificial intelligence has also been completely rewritten with a brand new Dynamic AI setting allowing the game to change the challenge you receive based on how well or badly your career is going. Of course, if you fancy a real challenge you can always set the AI to Legendary… strap yourselves in tightly though because it won’t be an easy ride!