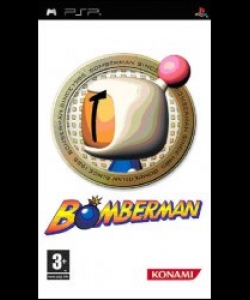 Bomberman marks the debut of the bomb-toting hero on the PSP system with classic gameplay and a wealth of new handheld gaming twists. An ominous black shadow is creeping towards Bomberman's planet, and sudden attacks by a mysterious robot army have brain-washed the inhabitants of surrounding planets, creating mass chaos. Now Bomberman must embark on an intergalactic adventure to stop this evil menace and save his planet.