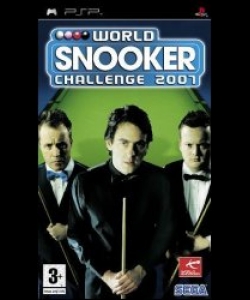 World Snooker Championship 2007 boasts 104 of the World’s best snooker players, with ten official tournaments all realistically modelled for the 2007 season. Can you take Shaun Murphy to another stunning World Championship win? Or will you be able to bring Ronnie O’ Sullivan back to form at the table to regain his titles?

“Last year’s World Snooker Championship was a massive hit for SEGA,” commented Matt Woodley, Creative Director of SEGA. “We are delighted to be coming back for a new season, with new additions to the game and another opportunity to prove yet again that Blade Interactive really are masters of cuesports.”

A host of new features compliment the title this year. In addition to the snooker offering, Blade Interactive have added the greats from the world of Pool. World Snooker Championship 2007 boasts a comprehensive pool experience where you can play 9 and 8-ball competitions. Play as or against an array of the World’s best pool players, and take on 10 major Pool tournaments, including the Mosconi Cup and the World Pool Championships. You can also show off your true skills in a Trickshot Championship – step up and pull off your favourite crowd pleasers from a vast selection of trickshots.

The new Golden Cue mode will allow you to mix the different cuesports within each match, so now you can test your versatility by taking on Ronnie O’Sullivan in frames of Snooker, Pool and more, all within the same match!

World Snooker Championship 2007 further improves the authenticity of the franchise with a new positional play feature. You can now position the cueball with greater accuracy than ever before, helping you to make advanced safety shots for better defensive play. The create-a-player mode has also seen dramatic improvements, allowing you to customise the star of the future.