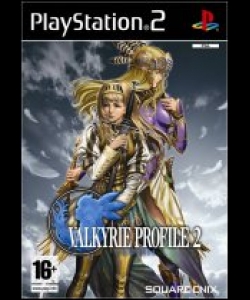 VALKYRIE PROFILE 2: SILMERIA is a state-of-the-art RPG developed by tri-Ace Inc., the developers behind the STAR OCEAN series. Beautifully crafted and boasting an innovative action-based approach to combat that allows you to team-up and co-ordinate your attacks with a friend, VALKYRIE PROFILE 2: SILMERIA follows the story of the beautiful princess Alicia. Possessed by the battle maiden Silmeria, Alicia is caught in the middle of a dramatic battle being fought by the Norse gods.

The valkyrie Silmeria once served Odin loyally, but after an incident ignited a conflict between them, Odin forcefully reincarnated her as a human. The human soul that would carry her spirit was that of Alicia, Princess of Dipan. Ordinarily, Silmeria's consciousness would have been sealed, her spirit dormant until she was next summoned.

However, the forced transmigration causes Silmeria's spirit to awaken within Alicia, leaving two souls to inhabit a single body. The spirit that should have been sealed has awakened — a situation Odin will not ignore for long.