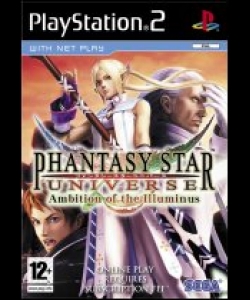 Whether tackling quests online with a party of up to six adventurers, or fighting through the next chapters of the exciting online story missions from the original game, Phantasy Star Universe: Ambition of the Illuminus enables gamers to experience the wonders of the Gurhal System through the eyes of a personalised avatar. The expansion pack allows gamers to experience an even richer and more varied Phantasy Star experience. Players will explore exciting new levels, such as the Ruins of Old Rozenom City and the subterranean Granigs Mines, where they will encounter new and more powerful enemy types and bosses, and master additional versatile class types.

The expansion further enriches the online Phantasy Star Universe experience with newly created and enhanced gameplay and customisation features. Players can commune in new and expanded lobby areas filled with colourful decorations and music, including the new Casino Voloyal where roulette and slots can earn players special casino-only items. Character and weapon customisation is even deeper with the introduction of new weapon types, armour, Photon Arts, and clothing. Also, each Guardian’s individual Room is upgraded with far greater options for customisation.

Phantasy Star Universe: Ambition of the Illuminus continues the exciting single-player action-RPG storyline as a new Human Fundamentalist group, known as the Illuminus, disrupts the peaceful Gurhal System throwing the Gurhal Government into chaos. Using their custom-made Guardian, players embark upon a series of missions where they will meet familiar characters like Ethan Waber from Episode 1 and others including GUARDIAN instructor Laia Martinez from Episode 2.

Since its introduction in 1988, Phantasy Star has revolutionised the RPG genre by creating new standards through innovative gameplay, as well as being the first console RPG to offer an online experience in Phantasy Star Online. This new installment also expands the popular online adventure of its predecessor and continues the quest for peace in the Gurhal System.