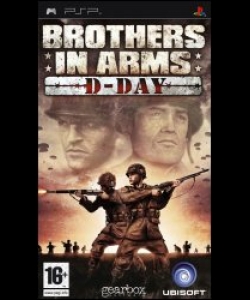 Today Ubisoft, one of the world’s largest video game publishers, and Gearbox Software, one of the world’s leading independent video game developers, announced Brothers In Arms D-Day, a World War II squad-based action game available exclusively for the PSP (PlayStation Portable) system. Developed specifically for the PSP system, Brothers In Arms D-Day will offer a new and unique gaming experience. Players will experience the intensity of WWII through the stories of Sergeants Baker and Hartsock and their squad of paratroopers during the Normandy invasion. Brothers in Arms D-Day is being developed by Ubisoft Shanghai in collaboration with Gearbox Software and will be available in Autumn 2006.

Brothers In Arms D-Day brings players the best of the Brothers In Arms franchise in a handheld gaming system. Players will experience D-Day as a Screaming Eagle with more tactics and action exclusive to the PSP system. Now players can surprise the enemy for the ultimate advantage in firefights, leading a fire team throughout the entire Normandy campaign. For the first time, players will also be able to lead a bazooka team, order their squad on an MG42, or fire mortar rounds. An enhanced co-op mode (Skirmish) offers players a 12-mission campaign.