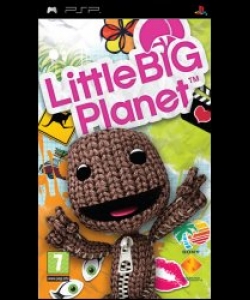 LittleBigPlanet™, the PLAYSTATION®3 (PS3™) hit that won various Game of the Year Awards last year and is credited with defining the “creative gaming” genre, is coming to the PSP®(PlayStation®Portable) for the first time. Developed by Sony Computer Entertainment’s Cambridge Studio in close collaboration with the award-winning Media Molecule team, LittleBigPlanet™PSP allows player to bring the beloved Sackboy™ with them on the go.

LittleBigPlanet PSP is a world of endless possibilities where imagination and creativity is king. In this stylish and stitched-together 3D craft material world, there is fun to be had for all ages, tastes and player types. On this portable LittleBigPlanet there are over 30 new developer-created levels through 7 new themed locations to explore and Play. Players will also find a huge host of materials, tools and stickers to Create objects or even levels that suit their style. And, pivotal to the creative LittleBigPlanet community, players will be able to publish their creations online to Share with others via PLAYSTATION®Network. Levels and objects can then be ranked so the best of the best rise to the top.

The LittleBigPlanet experience starts with players customizing Sackboy, the loveable main character on LittleBigPlanet. From there, players Play and learn about Sackboy’s powers to interact physically with the surrounding environment while navigating through over 30 vibrant themed environments. Players make their way across these worldly levels, avoiding obstacles, solving puzzles and collecting items that can be used to make their own creations.

To Create, players use the simple “Popit” menu system to access all of Sackboy’s materials, stickers, tools to bring their imaginations to life. Here, players have the power to build and move around any object in the game’s colorful landscape. All materials and objects have realistic physical properties and will behave accordingly. With a robust tool set at their disposal, the sky is the limit. Once the object or level is completed, players can publish and Share their creative works with the community via the PLAYSTATION Network. Of course, they can download and explore other players’ creations as well.

LittleBigPlanet continues to bring its revolutionary concept and the most accessible design tools to the videogame industry, this time in a portable form with LittleBigPlanet PSP. On this LittleBigPlanet, the world is full of infinite possibilities, where imagination becomes reality and the powers of creation are firmly in the players’ hands.