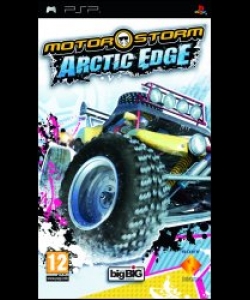 The most brutal offroad racing festival returns, with players taking part in the latest off-beat and secret site to join the wild and alternative MotorStorm festival. This time around, the location moves to the unpredictable Alaskan terrain, where players will race through multi-route tracks, harsh terrain, and sub-zero conditions to try and become festival champ. Developed by Bigbig Studios, the team behind the best-selling Pursuit Force™ series, MotorStorm Artic Edge brings the MotorStorm attitude exclusively to both PSP and PS2 for the first time.

Staying true to the signature MotorStorm style, players will throw traditional offroad driving and caution to the wind where the ultimate goal in the festival is to not only win, but survive. Players will take on a variety of brutal artificial intelligence (AI) racers and negotiate the dangerous arctic conditions, including sudden avalanches, broken ice bridges, and three different racing altitudes.

In addition to the six vehicle classes from the original MotorStorm, new snow-specific vehicle classes as well as all-new track designs are introduced to MotorStorm Arctic Edge. In addition to single player, racers can also engage in online multiplayer or ad-hoc mode on PSP and split-screen on PS2 to truly see who has the greatest skills in the snow and ice.