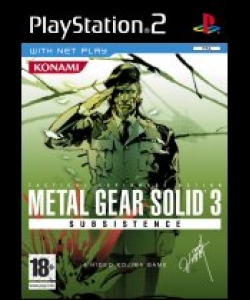 Designed as the ultimate Metal Gear experience for the format, the three-disc set features an advanced version of the classic Metal Gear Solid 3: Snake Eater; a second disc boasting a wealth of new game modes, including a full online version of the game, plus perfect recreations of the two MSX Metal Gear titles that started it all; and a three-and-a-half hour movie recut from the game’s cinematics on the third disc.

The first disc of Metal Gear Solid 3: Subsistence showcases a massively enhanced version of Hideo Kojima’s acclaimed Snake Eater adventure. Set in a jungle environment during the Cold War, Snake has been sent to retrieve a defecting scientist from a remote base. In addition to his phenomenal stealth skills, Snake also uses a unique ‘Camouflage Index’ to change his clothes and add face paint to blend in with his surroundings, while his hand-to-hand skills are enhanced via the ‘CQC’ Close Quarters Combat fight techniques.

New to this version, however, is the 3D camera system that allows players to view the action from virtually any angle – a system that Kojima Productions will also be using in the forthcoming Metal Gear Solid 4 for PlayStation 3. The first disc also features a ‘Demo Theatre’, wherein players can watch specific sequences from the game’s renowned cut-scenes using a simple-to-navigate menu system.

The second disc features a number of key modes designed to extend the Metal Gear Solid 3: Snake Eater experience. One of the biggest advances comes in the form of a full Online version of the game, answering the requests of countless Metal Gear fans. Using the PlayStation 2’s Network Adaptor, the second disc allows up to eight players to compete online for the first time ever in a Metal Gear game.

These new online modes push Subsistence to new levels. Kojima has devised ‘Sneaking Missions’, ‘Capture Missions’, ‘Rescue Missions’, ‘Death Matches’ and ‘Team Death Matches’, which will allow participants to battle against each other in real-time environments. The missions are set within key locations from Metal Gear Solid 3: Snake Eater, and in new areas such as Lost Forest, Killhouse and Ghost Factory. Players choose a team to represent Ocelot Unit, GRU or KGB, and the Online action will offer the user many CQC (Close Quarters Combat) abilities and weapons elements of Metal Gear Solid 3: Snake Eater.

The second disc also features a ‘Duel Mode’ which allows gamers to play through the timeless ‘Boss’ fights that punctuate the game and feature a cast of eclectic and deadly adversaries, while Kojima shows his lighter side with a ‘Secret Theatre’ of spoof scenes – including the return of Raiden! Fittingly for a set that celebrates Metal Gear Solid, Subsistence also features pixel-perfect copies of Metal Gear and Metal Gear 2 – the games that started it all on the now defunct MSX format back in 1987.

The three-disc set is completed by a visual piece-de-resistance, in the form of a full CGI Metal Gear Solid 3 movie. With a running time of three-and-a-half hours, the movie is a reedit of the game’s cut-scenes with additional radio dialogue and gameplay footage seamlessly added. Previously cut sequences have been restored to the movie, allowing people to sit back and watch one of the finest video games of all time in its entirety. And, in a nod to the future of the series, Subsistence also features the full trailer to Metal Gear Solid 4: Guns of the Patriots – a taster of Solid Snake’s final mission…